Corrymeela is people of all ages and Christian traditions who, individually and together, are committed to the healing of social, religious and political divisions that exist in Northern Ireland and throughout the world.

We commit every year at our dedication service to this vision and to play an active part in a process of change.

Ray Davey served as the Leader of the Corrymeela community from 1965 to 1980. During that time the work at the centre evolved from being run by volunteers who gave their weekends, holidays and summer breaks to having the programmes run by the joint endeavours of volunteers, staff and those who joined as Corrymeela Community members.

From 2003 David Stevens led the community until his untimely death in 2010. At this stage Kate Pettis served as the leader of Corrymeela until Inderjit Bhogal was appointed in 2011 and he served until the end of 2013.

Up until this stage, the leader of Corrymeela acted as leader of the Community as well as CEO of the more formal business side of the work. Over the years Corrymeela expanded to become an organisation with an annual turnover of £1.5 Million per year and almost forty staff.

In 2014, following a major review of governance and leadership, it was decided to create two new roles and early in 2014 Colin Craig was appointed as Executive Director of Corrymeela with responsibility for the operational side of the organisation. In September of that same year Pádraig Ó Tuama was appointed as Leader of the Corrymeela Community with responsibility for spiritual direction, vision and pastoral care. The new roles and division of responsibilities allow more time for new initiatives, greater focus on development and an enriching team leadership approach where each brings skills, expertise and analysis that enhances the leadership function. 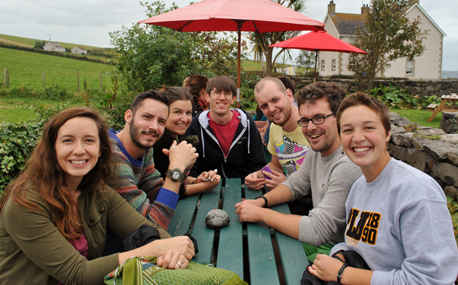 Alexander Wimberly became Leader in August of 2019. Alex’s pastoral background has helped him lead the community into conversations about how we care for one another within Corrymeela –– and how being a member of Corrymeela leads us to becoming ‘centres of peace and reconciliation’ wherever we live, work and worship.

Both the Executive Director and the Leader serve the vision of Corrymeela’s work under the guidance and governance of the Corrymeela Council and with the expertise of dozens of staff of extraordinary skill and commitment. Additionally, Corrymeela has, at all levels of its life and work, volunteers who have given decades of their lives to further the witness to living well together in our society, combining our faith, our politics, our community relations, our explorations, curiosities and commitment to our society.

Corrymeela is often translated from the original Irish as “Hill of Harmony” or “Hill of Sweetness.”  But there is another and more probable translation.  The name comes from a neighbouring townland, Corrymellagh, in the parish of Culfeightrin.  Culfeightrin means in Irish “The Corner of the Stranger.”  Corrymellagh means “The Lumpy Crossing Place.”

Perhaps the latter etymology is more apt for us: a place where differing groups, strangers to each other, are offered the opportunity to cross over into another space.  And the crossing is “lumpy,” not easy, full of pitfalls.