As part of  Fair–trade fortnight Corrymeela hosted the Traidcraft Big Brew event on Monday morning 23rd February and raised an astounding £210 which will be doubled to £420 by UK Government under their UK Aid Match scheme that allows the UK public to have a direct say in how an element of the overseas aid budget is spent.

It does this by matching public donations to fundraising appeals for projects to reduce poverty in developing countries.

NI Co–operative supermarket very generously donated Fair–trade tea, coffee, sugar, bananas, chocolate; biscuits and other Fair–trade products from their Ballycastle store and Corrymeela used some items for the Big Brew and raffled other items to all the supporters of the Big Brew. 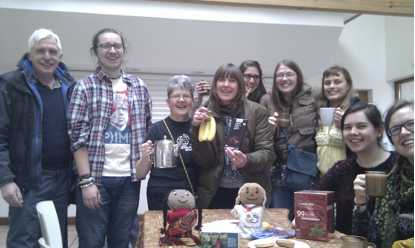 Corrymeela wishes to thank all those who came to support the Big Brew and for Kevin from the local Chronicle for taking such great photos and Chris McCaughan, chairman of the NI Co–operative Northern Irelands Members Council who kindly gave his support and backing for the event.

This event, not only raised awareness about Fair–trade, but also created a bit of fun for the participants.  Beth Randall, Corrymeela volunteer led singing with a song from South Africa, ‘Walk with me, for the journey is long’in three parts including syncopated singing.  Everyone sang In solidarity with thousands of smallholders in countries throughout the world working their own way out of poverty.