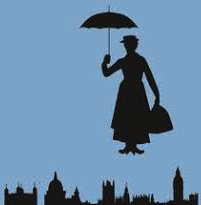 One of our Community Members Jade Irwin talked to us about a fundraising event she organised just before Christmas. Thanks Jade!
You’re a bit of a Mary Poppins yourself!

It is so often the seemingly small, insignificant words, gestures and kindnesses that leave a lasting mark upon us. It could be said that one of the greatest barriers to putting an idea into action is the fear of insignificance; of not having a transformative or beneficial impact. How to do an organisation like Corrymeela, that has had such a profound impact on so many, proud?

I love Christmas. I am one of those people who has enough Christmas jumpers to wear a different one each day for a fortnight, and I feel no shame whatsoever wrapping myself in Christmas lights, wearing Santa hats and humming Christmas carols from mid–November right through to January. I once tried to leave my Christmas tree up until the end of January, but my dad snuck into my house and took it down while I was at work.

Another love of mine is the cinema. There is something about escaping into another world for a couple of hours and becoming immersed in a fictional storyline with great visuals and surround sound that appeals to me. I remembered a previous Corrymeela fundraiser at The Strand Arts Centre in East Belfast around Christmas time and how utterly delightful it was, and I thought how lovely it would be to do that again. Being a youth and families worker, I have organised a lot of events, but I felt the pressure of this one. What if it went down like a lead balloon? What if it was compared to the previous fundraiser and was deemed to be wanting? What if we didn’t even break even never mind make a profit? What if it was just altogether unremarkable or insignificant?

With a bit of support from a few trusted friends (also Corrymeela community members) I decided to go for it. After all, the new Mary Poppins film was out, and despite being sceptical about it as I’m such a fan of the first one, I was curious enough and thought a good number of others would be too.

Forty–seven others in actual fact were as curious as I was to pop out over the Christmas holidays, to that lovely charitable cinema on the Holywood Road in Belfast, and others who weren’t able to make it, kindly donated after the event. £530 was raised to aid the peace and reconciliation work that Corrymeela do so thoughtfully. It got me to thinking about all the coffee mornings, bake sales, film fundraisers, sponsored walks and other seemingly ‘insignificant’ fundraising events that take place throughout the year for a range of fabulous organisations, and that they are not insignificant at all. In fact, they are quite remarkable, because not only do they yield financial proceeds, but they communicate care, support, dignity, passion and compassion. If you are thinking of organising a small, insignificant fundraiser for Corrymeela, please do, because it will be remarkable.