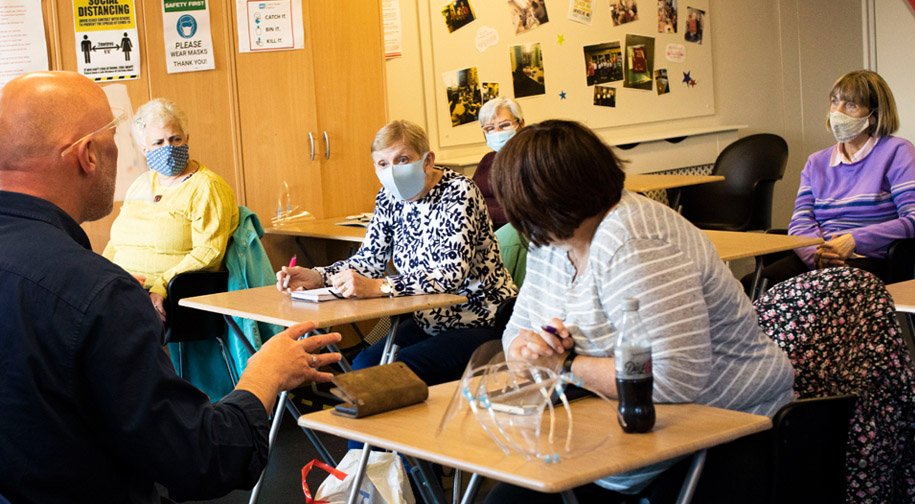 Back to the Future
by Hedley Abernethy

Over the past two years, Corrymeela has enabled more than 200 people to explore issues relating to the Decade of Centenaries—the period between 1912 and 1922 which shaped the social, cultural, religious and, of course, political landscapes on this island. Each of those years brings with it its own significance – a Solemn League and Covenant signed in 1912 by nearly 500,000 men and women committed to a union with the rest of the United Kingdom; the Easter Rising in 1916 and a proclamation of Irish Independence; an election that cemented political differences and effectively moved a call for Home Rule to a movement for independence; and a bloody insurgency that saw many people killed. And in the middle of that period, a brutal and bloody war that saw tens of thousands of Irish lives lost on the battlefields of Europe.

The Government of Ireland that effectively partitioned the island of Ireland was enacted in 1920. One hundred years later, as 2020 drew to an end I asked women from Shankill Women’s Centre and folks who attended the Atlas centre in Lisburn, how should we ‘do’ 2021 – the centenary of the partition of the island that created Northern Ireland and ultimately the Irish Free State. They were certain that the pain & bloodshed that was visited on the island of Ireland in the 1920s has no place in the 2020s. That said, they also recognised that fundamental differences remain about the existence of Northern Ireland. There are those that will see 2021 as a time of celebration. Others will portray the year as one of lament and regret.

In engaging members of any and all communities in reflection on 100 years of partition, we seek to give a space for the need for and the pain caused by partition to be discussed honestly and openly. In doing so we ask that our participants start with what has become known as the principles of ethical remembering. Our thoughts must be grounded in historical fact, there are many interpretations of those facts, and there are consequences to historical choices. Yet – and importantly – all the discussions of which we are part must be coached in the promotion of an inclusive and accepting society.

Throughout this year we will post details of events that will help us and enable us to consider why and how we consider commemoration of the events of 100 years.  If you would like to be updated about these events, please feel free to sign up to our mailing list by clicking here.