We have kindly been given permission to share this article, written for Ayrshire Magazine, hearing the stories 5 young women from the 4ward 2gether group based in Scotland, and of their experiences of staying at Corrymeela. 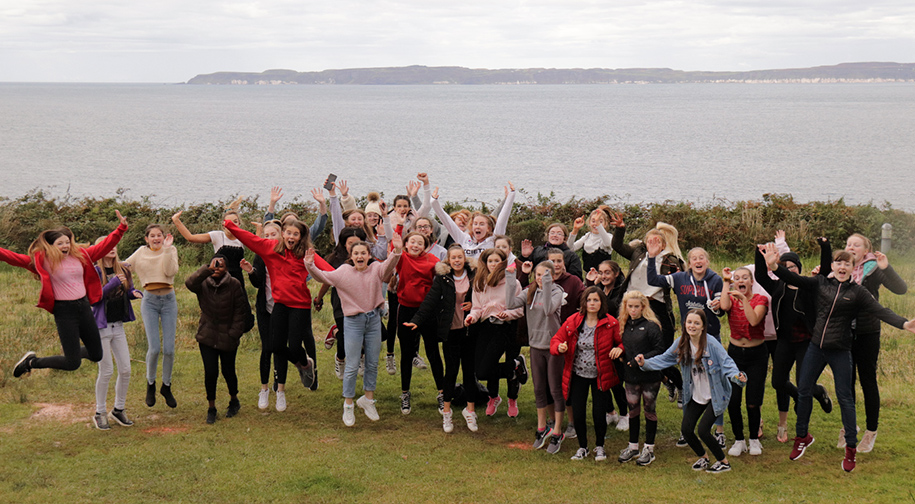 We read the news…

A man attacked in a Cardiff street because of his sexuality, football fans in Glasgow attacking a pub because it is the well known watering hole of their rivals, a former soldier murdered in London in the name of religion. Try people at increasing risk of domestic violence because two football teams have clashed and the emotions of their partners are running high? A woman verbally abused in the street because she is wearing religious clothing? A man called derogatory names because he is a different colour and/or nationality.

These acts are unacceptable, often carried out in the name of religion, sexuality, race or, in fact, any perceived difference the perpetrators can find to excuse their actions.

It is difficult for most of us to understand why such cultural or religious or football differences provoke such behaviour. But five young girls who not only want to understand, change things for the better and celebrate diversity and are all members of Kilmarnock–based youth group 4ward 2gether.

“4ward 2gether,” Ciara Bertoncini–Gilmour told AM. “Is a youth run group that started out focusing on anti–discrimination, anti–sectarianism and anti–prejudice. But it has now developed inti something much bigger. As well as teaching our original values, we also like to talk about self–love and how similar we are deep down.”

The girls also enjoy an active link with the Corrymeela Community in Northern Ireland. Founded in 1965 by Ray Davey, John Morrow and Alex Watson, it was set up to help people from both sides of the Northern Irish conflict, the so–called “Troubles”, to deal with the violence and to look for reconciliation. Now a residential centre on Northern Ireland’s north coast is used as a focal point for promoting the belief that people from all backgrounds can recognise each others differences, respect these and live and work together.

“It started when 10 of us were taken to Northern Ireland to learn about sectarianism,” Eve Hamill one of the original girls to go over to Corrymeela chimed. “We…returned the next year, with more girls, where we learned more about it – the original girls were mentors. On the third trip, four of the original girls(including me) were facilitators. We led a few sessions throughout the weekend about anti–discrimination.”

It is remarkable that these five young ladies, who, at present, are studying at university, holding down part–time and full–time work, had such insight into what is a complex and difficult subject.

“On the fourth and most–recent trip,” Eve continued. “Myself and four girls…organised the whole weekend and led all but one session. We also did a number of sessions within the community – from groups of schoolchildren, to a group of Protestant elderly people, to a group of young felons—all with the goal to open people’s eyes to discrimination and prejudice; how we are all guilty of it, but we are also all capable of putting an end to it and recovering from these thoughts.”

Recovering is a loaded word here, often used in the context of alcoholics or drug addicts it resonates with ideas like Cognitive Behavioural Therapy. But Eve, to her credit, was nothing if not frank about her motivations for getting involved.

“In complete honesty?” She said. “I first wanted to get involved to get a day off school and a trip to Northern Ireland! I didn’t know much about sectarianism, except for in football with Celtic and Rangers. But going on this initial trip, I learned all about the “Troubles” and how bad sectarianism is in Northern Ireland– but also how far it has come.”

For another of the girls, Gabrielle Maberly, her interest was drawn from developing sense of cause.

“I wanted to get involved,” she said thoughtfully. “Because I wanted to help inspire different generations to  take a stance and make a change in our society. The way we talk, act and even think, contribute to stereotyping, sectarianism and diversity. I enjoy challenging people to think before they act, and consider the way their thoughts and actions can have an effect on people.”

Meanwhile, Emma King’s incentive was more about understanding things she had heard but didn’t quite understand when she was younger. “When I was first approached to go,” She told AM. “I was really interested in learning more about the roots of sectarianism, as I am too young to have been around for the “Troubles”. Although, having grown up in Scotland around (the) Celtic/Rangers feud I wanted to understand where that came from.”

Emma was quick to agree. “I think modern day, sectarianism is mostly driven through ignorance. People have grown up listening to parents and grandparents going on about this hatred for so long that it is all they know.”

While agreeing with Emma and Isla, and while acknowledging the negative aspects of this way of thinking, Gabrielle, however, was more than hopeful that progress was being made. “It’s all people know,” she told me, “It’s what they are used to have been brought up around. However, this doesn’t mean that this is the future or the way forward.”

It is, for all five, a mission to understand where these ideas come from and why they grow into violent, destructive forces. In turn, it presents itself as an opportunity to take such powerful beliefs, challenge them and look at how they can be used for good. How they can be used to bring communities together to celebrate that diversity. 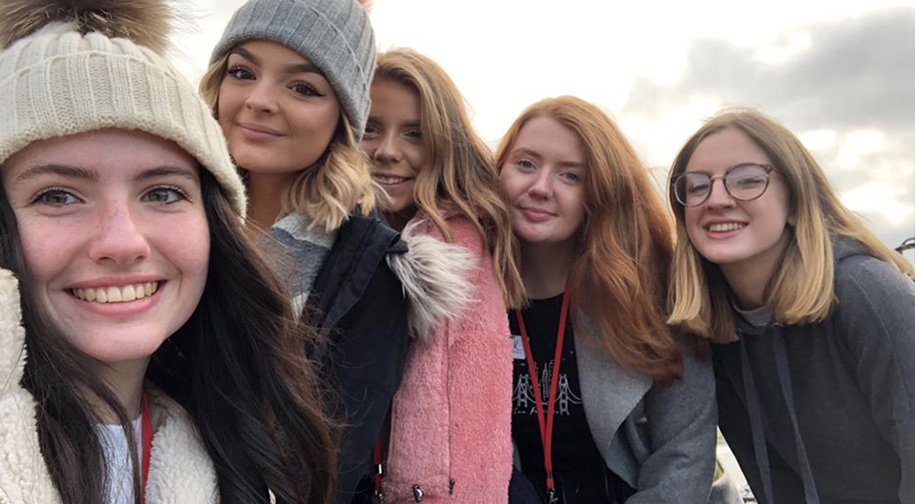 While recognising peoples’ differences, respecting and celebrating these, it is, for the girls, the deeper—touching soul – similarities that people share that really make them human.

“I think,” Eve started up again. “These small, personal sessions, led by young people, has a bigger impact than a school/classroom situation. We are young, and this can make the sessions seem much less about ‘learning’ in an academic sense. I have also felt the of being a part of these sessions – and noticed how it impacted others. It is amazing seeing peoples’ faces when they realise they have been prejudiced, without meaning or wanting to. We try to emphasise this isn’t a bad thing, we are all prejudiced, but it is how we act on these prejudices that matters. You can see they want to change…. They even tell us that.”

“I have seen at first hand how the 4ward 2gether project has changed attitudes. We’ve been lucky…to lead workshops with people from all walks of life. While some of these participants didn’t even realise they had problematic views, after taking part…many of them came… to us and said that what we said really impacted on them and had changed the way they were now looking at the world and others.”

Moving from using differences, real or perceived, to rip communities apart to standing together, in acceptance of everyone’s differences, and being stronger as a result will take time.

“I owe a whole lot to this project,” Eve admitted. “I started as a shy teenager with a lot of anxiety – this .. has helped me to be able to open up to and trust others… also helped me with my public speaking and musical performances. I have used the skills I gained on the trips/at sessions in Kilmarnock for all parts of my life, including university and the jobs I have had. I have become a much more confident and self–assured person.”

You can only have respect for these five young ladies making their early foray into life and their future and, the communities they are involved with and society in general.

They stroke a difficult nerve, especially in these times of cornavirus when we have no alternative but to all work together across the world. Who, in their right mind, would go into hospital and refuse life–saving treatment because the person who was going to look after them was of a different religious persuasion, or was of a different nationality or colour or supported a different football team? And where do we stop? Do brown–eyed people take up arms against blue–eyed rivals? Of course not.

Later as I drive, Tears For Fears “Sowing The Seeds of Love” comes on my radio.

It strikes a chord… so to speak.

“I hope that 4ward 2gether will continue to grow,” Isla shared with me. “Reach as many people as we possibly can. I feel that it’s crucial that we continue to recruit a range of different people to join our group, as this way we ourselves are able to learn more, and therefore educate more effectively.”