An innovative reconciliation DVD for schools relating to previously uncovered ground of the peace building effort in Northern Ireland  was launched at Belfast’s Queen’s Film Theatre on 1st May 2013.

Primarily designed to support educators and young people to link the lessons from the past to the choices individuals make  today, ‘Upstanding: Stories of Courage from Northern Ireland’ is a 45 minute DVD exploring 10 diverse case studies from all  over Northern Ireland showing how people stood up to violence, discrimination or prejudice. The new DVD is fully aligned with the revised Northern Ireland curriculum in supporting cross curricular approaches to  learning including History, Citizenship, English and Religion Education at Key Stages 3 and 4. An accompanying educator’s  guide, transcripts and additional stories will support classroom delivery.

The event was attended by 150 people with participants including education officials, young people and teachers who have been involved in the project and several of the people who  contributed their stories.

Coordinator of the Facing our History, Shaping the Future project Sean Pettis commented “Many thousands of people stood up to violence during the Troubles. They are not usually called heroes, but their actions were both courageous and had consequences. We are greatly indebted to our contributors for trusting us with their stories of courage. We hope this new resource will be of huge benefit in educational settings and support the teaching of controversial Irish history in an innovative and interactive way.”

The film has been produced by the Corrymeela Community as part of ‘Facing Our History, Shaping the Future’ Project in  partnership with Facing History and Ourselves. The International Fund for Ireland supported its production through its  ‘Sharing in Education Programme’ which is managed on behalf of the Fund by the Department of Education. 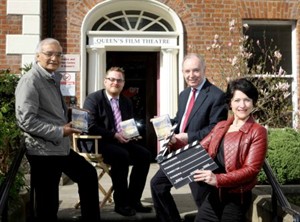