Ireland’s oldest peace and reconciliation community, Corrymeela, celebrated its 50th Anniversary with a conference on diversity, in Dublin. More than 100 people gathered in All Hallows College, Drumcondra for the daylong conference looking at migration, diversity, prejudice and Upstanding. The conference was organized by the Dublin Corrymeela Group chaired by retired Anglican Minister Rev David Godfrey. 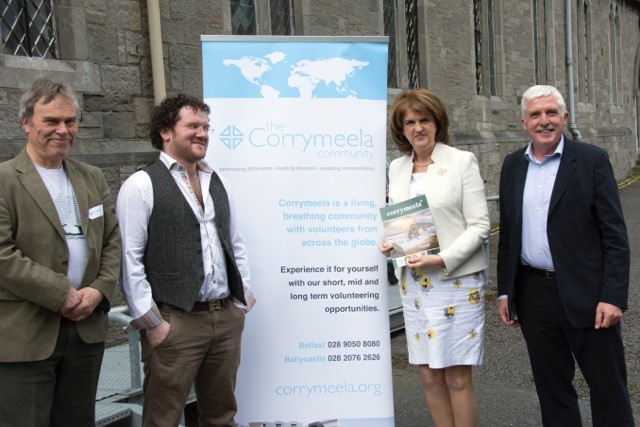 Tánaiste Joan Burton was the keynote speaker in the afternoon. She saluted the work and dedication of Corrymeela over the last half century, and spoke more widely about diversity and prejudice in Ireland today. Within her own Dublin 15 constituency more than a third of people were immigrants and diversity was now the norm. She particularly was impressed with how communities and schools had risen to the challenge and believed that this had brought advantages to a society that cherishes the identity of its citizens. The Tánaiste believes we have come a long way as a society but that there is still much to do.

“Perhaps the simplest answer is that we cannot learn to live together well overnight. To improve our societies and reach towards our goals, we must, as many of my constituents have done for the past decade, And as Corrymeela has now done for half a century, work long and hard, Brick by brick building the world we want to see. With little thought of reward beyond making tomorrow better than today.”

The conference also heard from Tiffy Allan the co–ordinator for the City of Sanctuary movement, which works in 40 towns and cities across Ireland and the UK. She said that one of the most important challenges in how to be human is how we deal with difference. She also highlighted the importance of community when standing up to injustice.

“It is important to stand together. Our world is constantly plagued with fear of the other, and that fear denies our humanity and our own stories. If we take one step and move towards people who are different, then we ourselves become more enriched.”

This point was illustrated by a showing of a film made by Corrymeela as a resource for schools across Ireland. Up Standing – Stories of Courage from Northern Ireland tells of 10 people who stood up to violence and prejudice in Northern Ireland, often in very difficult circumstances.

The conference also heard from Sahr Yambasu – a Methodist minister from Sierra Leone now living in Ireland, Nadette Foley from the Irish refugee council and Uché Gabriel Akujobi. Uche is an Actor, Director, Musician and writer originally from Nigeria but now an Irish Citizen.

Corrymeela Community Leader Pádraig Ó Tuama, a Cork man now living in Belfast drew the learning together at the end of the conference by asking what does it mean to be a neighbour?  He related his won experience of moving to Belfast and how the people quoted the old Irish saying

which is generally translated as “It is in the shelter of each other that the people live.” However scáth can also be translated as shadow, and therefore our community has the chance to be either a shadow or a shelter. The answer he said lies in a simple moment of courage, which can turn shadow into shelter.

“Corrymeela’s journey over the last 50 years has shown us the power of people telling their stories, of shared hospitality, of telling the truth about the present, of turning towards each other and finding strength, life and hope in each other. These lessons are more relevant than ever today, in an increasingly diverse Ireland.”

The celebrations continued on Saturday evening with an evening of poetry and music in the Glencree Peace Centre. On Sunday friends and supporters met for a guided walk though Dublin looking at places of prejudice and Upstanding, followed by a service at St Patrick’s Cathedral.

Corrymeela believes that we can learn to live and work well together and the lessons of reconciliation in Northern Ireland can also be applied to fractures in many countries across the world.

It was also announced during the conference that Prince Charles would be visiting Corrymeela during his trip to Ireland and Northern Ireland at the end of the month. His visit is based around the theme of peace and reconciliation.