The following is an expansion of a feature in our bi–annual magazine ‘Corrymeela’ and is the full text of Community Member, Derick Wilson’s lecture in memory of the former Leader of Corrymeela, Dr David Stevens. The talk was given as part of the Community Relations Council’s Annual Memorial Lecture, where David had been a member of the Council over several years.

RECONCILIATION AND ‘THE INTIMACY OF HONEST DIFFERENCES’

A Talk in Memory of Dr. David Stevens, 26th March 2019 by Derick Wilson 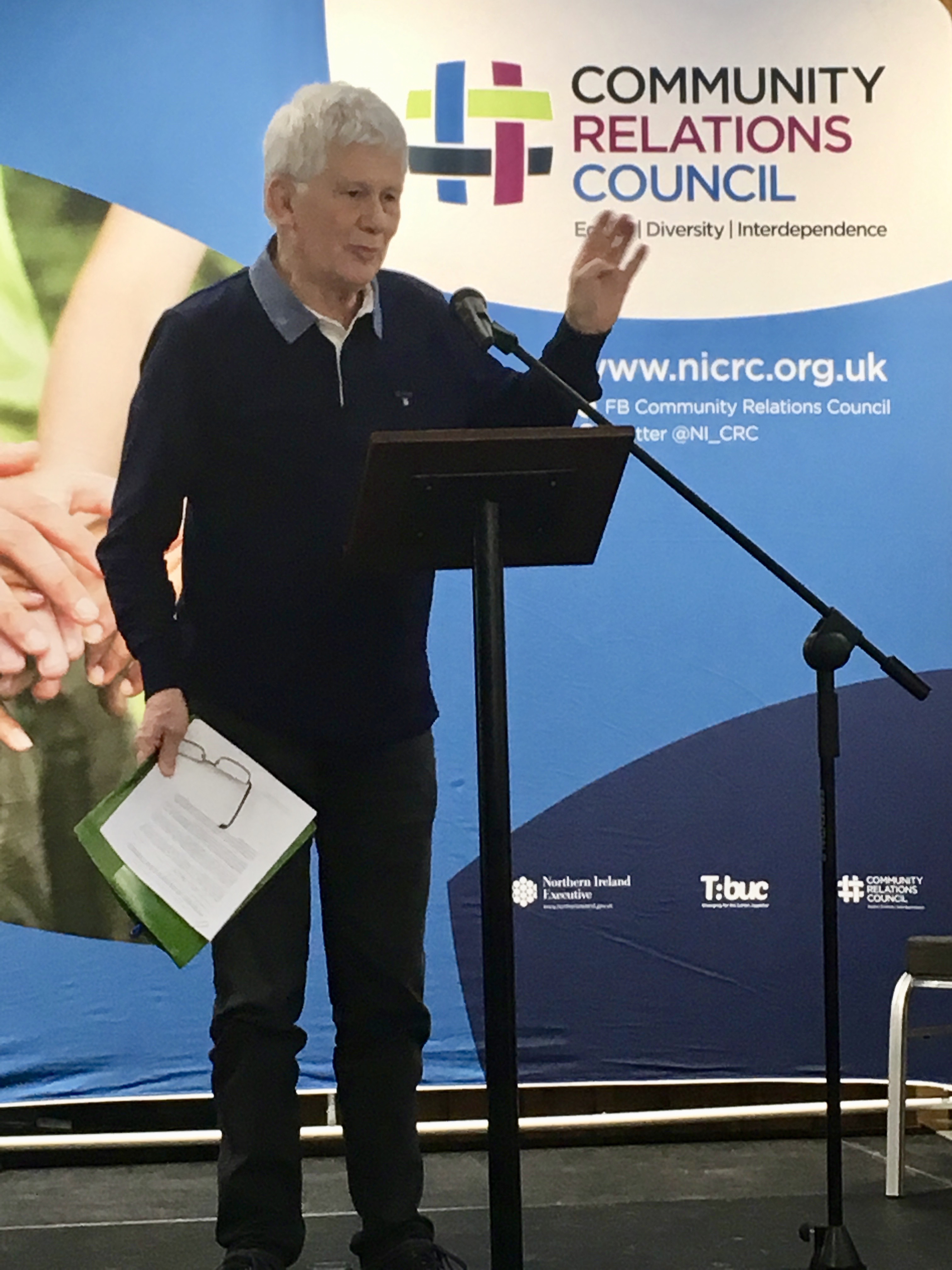 A major theme for David was that “reconciliation involves people finding a way of living together in difference”.

It is only when open and honest relationships are established that people can experience ‘the intimacy of honest differences’[1], the robust conversations that take us all forward beyond the cultures of silence, denials, and evasions–away from cultures of separation, avoidance and politeness that exhaust us and do not move us forward.

Twenty–one years after the 1998 Agreement we are still having to argue for, and promote, a practice that nurtures safe spaces, brings people from diverse experiences together and, in new relationships, honestly share their differences. In societies where political momentum falters, as here, peace processes are fragile (see John Braithwaite).

In the continued absence of a devolved administration, our task is to prepare an informed and imaginative civic ground capable of engaging with politics as it evolves here.  A robust civil society culture would be enhanced if we all ‘worked in the knowledge of one another’, sought not speak badly of one another, and supported practices characterised by the ‘intimacy of honest differences’

LOCAL AND GLOBAL RECONCILIATION ARE INTERLINKED

Building a more just and fair, respectful and diverse, interdependent society here demands that we work to a wider global vision to secure just, inclusive, respectful and sustainable ways of living[2]. The challenge of the Friday Pupil Protests saying “you are not doing enough!” means that, unless we face this challenge, there may be little of life to make just, respectful and inclusive!

RECONCILIATION: ‘A WAY OF LIVING TOGETHER IN DIFFERENCE‘

David Stevens always demanded rigour; he wanted reconciliation groups to be clear about the meanings of the terms they used.

“Sure, it all goes to show that we are all the same!”

This was one phrase that, when people associated with community relations work uttered it, that was to David’s total and utter dismay!

In his text ‘The Land of Unlikeness’, David argued how the established statecraft of diplomacy could not deliver in contested societies. Such societies, if they move forward at all, can only do so through face–to–face meetings, even where each person, and the traditions they come from, can appear to always be trespassing on the others’ territory, generating mutual fear and threat.

All projects or programmes we are part of must meet this litmus test that, at their core, they support people from diverse traditions, cultures and political outlooks engage together ‘in difference’!

Often civil society does the heavy lifting and gifts politicians with the conditions for building peace, only to be marginalised by politics in peace processes.We must work to have that place recognised by politics[3].  I think that groups need to become clearer, at this time, about articulating how peace building in contested societies needs embedded by civil society organisations. We now are in uncharted waters in terms of peace processes.

How do we build peace in its widest vision when politics is on hold?

From a long partnership between Corrymeela and the Mennonites we draw on the work of John Paul Lederach[4] who identified three gaps as symptomatic of all peace agreements faltering:

1.   the interdependence gap, where people are able to link people from all levels together and effect lasting change;

2.   the social justice gap, ensuring all worked to address social inequality; and

Corrymeela has identified a fourth, the inter–generational learning gap around reconciliation.

A 2 years full time stint as a volunteer with Corrymeela in Belfast, and then  as Secretary of the Irish Council of Churches, David supported various groups:

He brought Rene Girard to Corrymeela through the DutchNI Committee. His work was about the possibilities for people to model freedom and trust in modern society and dissolve and erode experiences of escalating and destructive rivalry. This became a 40–year voluntary reconciliation education programme!

At the heart of this inter–generational approach is the creation of relational spaces in which people, with very different experiences and beliefs, can experience meeting around ‘the intimacy of honest differences’.

David argued in The Land of Unlikeness that “the possibility of having real meetings where there is honest conversation, respect and mutual regard is narrow in a contested society”[6]. If reconciliation is a dynamic quest involving spiritual, psychological, social, economic and political dimensions, then there is a need to develop spaces and encounters where all these strands are given time and space where we experience “the intimacy of honest differences!”

From the practical application of Rene Girard’s thinking, we learned that, in this society, too often ‘community’ is generated at the expense of alleged difficult others, through the often unacknowledged act of driving them from our midst.  All cultures, in some manner, are secured in often hidden and often–unacknowledged violence–they are communities of sacrifice–the communities of the successful scapegoaters who remain and who feel able to deny their actions. We need to create communities of communion, characterised by all being included, a contrast to the excluding ways we often live.

David was especially critical of faith communities not unconditionally embracing reconciliation as a non–negotiable strand in the Christian tradition and sometimes building defensive postures rather than being open to what is stated as being central to them–communion!

David acknowledged the many acts of individuals and small groups within the churches that have, and do, work for reconciliation, often unsupported by the wider institutions.  Like some others, he wanted people in many different traditions within the Christian Churches to acknowledge, and critically engage with, the ecumenical vision of a just, peaceful and sustainable world [7] (JPIC declaration of 1960s) [8].

He wanted an open society where people of different faiths, cultures and political traditions could meet as citizens and experience ‘the intimacy of honest differences’!

“WE ARE MORE THAN OUR BELIEFS”

Some people argue they cannot move forward and meet different others, because they hold to sacred beliefs or unbargainable positions. Yet in positive encounters they often learn they are more than their beliefs.

Some people are told from an early age that they are stupid, or limited, or incompetent, and they believe this and live it out. When these people experience a transformative relationship they become more than the beliefs and structures that have held them back.

Some people brought up in belief systems that underpin an expansive practice, are often able to embrace new thinking and practices, beyond their current positions. They too find they are ‘more than their beliefs’.

David understood deeply that in new relationships of trust and openness we all grow and change–we are more than our beliefs! For me, the different christian traditions could do more to foster developmental spaces where people experience the ‘intimacy of honest differences’. Equally so, civil society groups and organisations could self critically examine their implicit cultures, and root out support for partisan identities that may lurk there and explore “the intimacy of honest differences”.

Societies such as ours need transgressors (they often are called traitors)! Transgressors are people who will transgress the boundaries between their backgrounds and others, and also face into ‘their own’ and critically engage with them! When people from opposed beliefs or positions meet in open and trusting relationships, there can be a new energy and freedom associated with that relationship. Such journeys are restorative in the sense that old patterns have been re–invigorated or new ways have been nurtured[9].

When I look at the evidence in many other countries: in schools; in the adult and juvenile justice system; in restorative practice models developed by local authorities in their relationships with citizens; attempts to create restorative regions; in serious crimes, post sentencing as well as in lower level crimes, pre–sentencing, and, more recently some excellent work, post court, in the area of sexual violence; I ask does this restorative concept not have something to say to us here?[10] Such breakthroughs are experiences where ‘the intimacy of honest differences’ happens. This experience is worth learning from.

A restorative society culture would be characterised by:

To deliver the fruits of a restorative culture we need a renewed focus on:

Here significant and important communal learning, essential to our common good and the strengthening of civil society occurs. 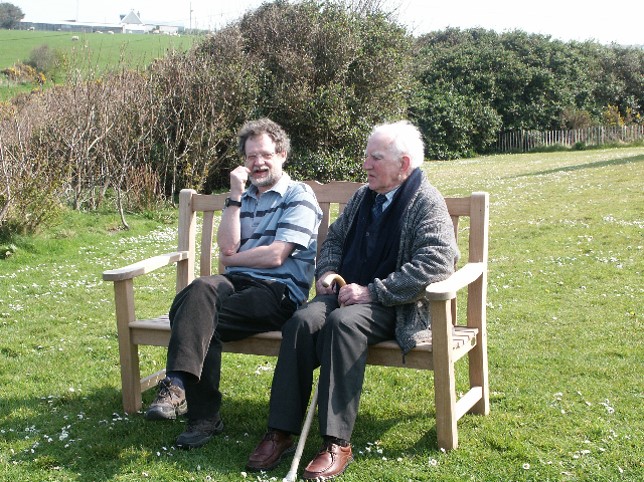 I often talked deeply with David about many things and we learned:

Let us never be afraid of showing weakness or vulnerability.

Let us be open to saying sorry.

Let us be prepared to share ourselves and our lives with others in order to move us into relationships with the estranged other, rather than feed fear, distrust, enmity and violence.

Hannah Arendt suggests that “forgiveness is the unexpected gift of the victim to the perpetrator!” and also to those of us in wider society.

Arendt suggests that “forgiving… is the only reaction which does not merely re–act but acts anew and unexpectedly, unconditioned by the act which provoked it and therefore freeing from its consequences, both the one who forgives and the one who is forgiven.[12]”

In such ways different people around us, and we too, will be opened up to experience more “the intimacy of honest differences” without which it will be difficult to we find our ways forward together into a more open society; a more just and fair one; a more interdependent one and a more sustainable world.

My thanks for this friendship with David Stevens.

[4] JP Lederach, ‘Justpeace: The Challenge of the 21st Century, in People Building Peace: 35 Inspiring Stories from Around the World, ed. European Centre for Conflict prevention, 1999, 27–35.

The Presbyterian and Catholic churches here, especially, often cut themselves off from wider ecumenical actions historically in the world. The ecumenical movement in Ireland was, and still is, linked to a vision that was one centre of opposition to National Socialism in Germany in the 1930s ; a vision underpinning many who supported the disappeared in Argentina 1974 to 1983 and, currently, the work in in Argentina and Chile to ‘encourage spaces for encounter between the churches in order to give the witness of service to the world’; a vision underpinning the MinJung[7] theological movement of opposing military power in Korea and standing with the poor; the work of the Croatian–Austrian priest and informal educator, Ivan Illich and the Brazilian theologian and educator, Paulo Freire.

[8] See texts on this http://www.ebooksdownloads.xyz/search/justice-peace-and-the-integrity-of-creation

[9] Jenkins restorative: the tendency to give new strength or vigour. This interpretation points to something new, something better and healthier, suggesting a revitalisation, or new possibilities that might develop. In this context, restorative suggests something creative and productive. See Alan jenkins, Shame, Realisation and Restitution: The Ethics of Restorative Practice. ANZJFT Volume 27 Number 3 2006 pp. 153–162

[11] See Alan Jenkins and his future oriented definition of restorative as “the tendency to give new strength or vigour. This interpretation points to something new, something better and healthier, suggesting a revitalisation, or new possibilities that might develop. In this context, restorative suggests something creative and productive.” In Shame, Realisation and Restitution: The Ethics of Restorative Practice, ANZJFT Volume 27 Number 3 2006 pp. 153–162